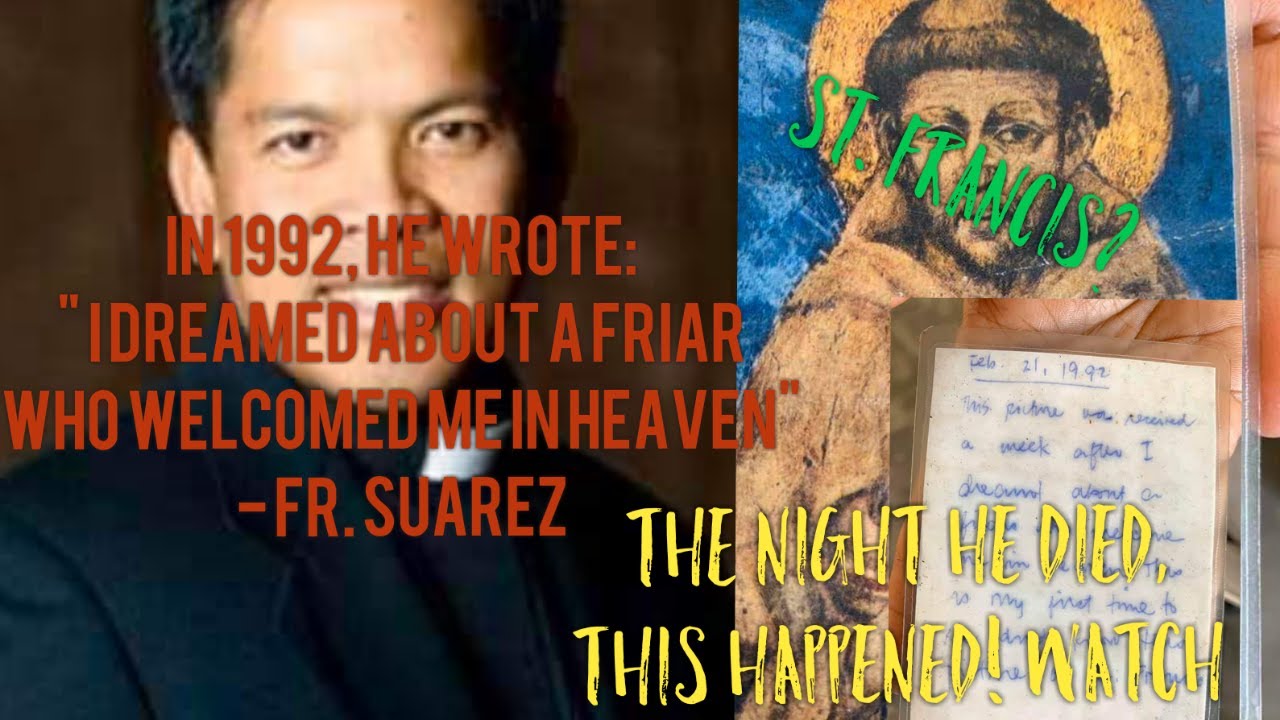 This is based on the Story of Tiya Idang Zoraida Francisco (Fr. Fernando’s Aunt from Maternal side)

Fr. Fernando died the afternoon of February 4, 2020. From Asian Hospital, he was transferred to Heritage Park Memorial. Tiya Idang, Tita Annie Cruz and Nanay Zena, his mother, were the ones who stayed in a room while Fr. Fernando was in the morgue being prepared for viewing that early morning of February 5, 2020.

Around 3 am of 5 February, a man introducing himself as FR. FRANCIS knocked on the door and said, “Tiya Idang, I am Fr. Francis, a bestfriend of Fr. Suarez. He always confides to me his problems and worries. Kindly accompany me to the morgue so I can bless him.”

Ironically, she was led by Fr Francis to the morgue. They passed through “talahiban” (tall grass). When they reached the morgue, Tiya was disappointed because Father was already embalmed and the scissors and other tools were there.

Fr. Francis prayed over Fr. Suarez. No other people were there but it seemed a crowd was responding to his prayers.

When the prayer was done, Fr. Francis went ahead as he was heading to the airport for a flight, according to him.

Tiya Idang went back to their room alone. She reached the room and could not find the “talahiban” nor “the tall grass” where they earlier passed through.

She was not able to sleep anymore until morning.

After that, she kept inquiring from people close to Fr. Suarez about who is Fr. Francis. Does he have any knowledge why Fr Suarez was already embalmed before they arrived? Day after day she kept asking people about this Francis.

Nobody could tell her.

On the morning of February 14th, she skimmed through the souvenirs from Fr. Suarez. She stumbled on an old laminated card with inscription from Fr Suarez on February 21, 1992. It says…

“This picture was received a week after I dreamt about a friar who welcome me in heaven. This is my first time to see and know this picture of Fr. Francis.”

When she looked at the other side of the laminated card, she saw the picture and exclaimed this is him! This is the Fr. Francis who brought me to the morgue to bless Fr. Suarez!

It is St. Francis of Assisi. ❤️

Pope: ‘The Mass is not a show,’ put away the phones!

Can I hear an ‘Amen’? Check this out:  On Wednesday a fiery Pope Francis chastised those who spend Mass talking to others, looking at their phone or even taking pictures during papal liturgies, saying these are distractions that take focus away from the “heart of the Church,” which is the Eucharist. “The Mass is not a […]

Carol Glatz  3 September, 2017   By virtue of its very definition, marriage can only be between a man and a woman, Pope Francis has said in a new book-length interview. “We cannot change it. This is the nature of things,” not just in the Church, but in human history, he said in a series of […]