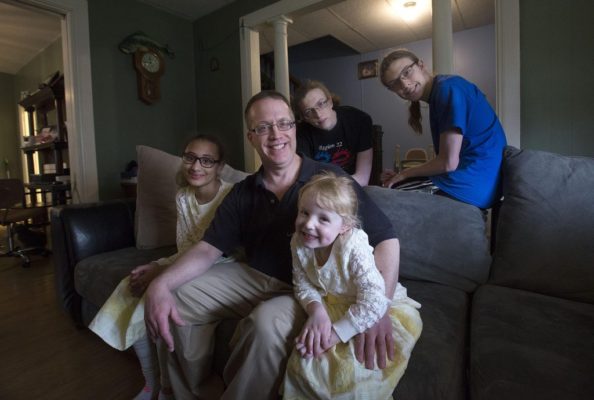 AMBRIDGE — Thy will be done.

They are more than words in a prayer for Norman Erb-White. They’re part of his life journey.

Erb-White, 47, of Ambridge is or, more accurately, was an Anglican priest. Until Saturday, when Erb-White and five of his six children were received into the Roman Catholic Church at Good Samaritan Parish in Ambridge during the Easter Vigil Mass.

Erb-White was raised in the United Church of Christ — a preacher’s kid nonetheless — and he said he felt called to be a pastor.

“We jokingly call it (preaching) the family business,” he said, because his mother and a sister are United Church pastors, something Erb-White also initially pursued.

“A year through that, I realized, hey, I’m no longer a UCC,” Erb-White said.

He had married Deborah, who was raised Catholic, and they had become Episcopal and then Anglican as a compromise between their faiths. They started a family, and Erb-White became an Episcopal, then Anglican, priest.

But he had been attracted to Roman Catholicism since he attended Mass with Deborah and studied the faith before they married in 1994.

“We’ve been praying and thinking about the Catholic thing for this 20-plus years,” Erb-White said.

Inés San Martín Jan 27, 2018 VATICAN CORRESPONDENT ROME – It’s official: A bishop, seven Trappist monks and 11 other religious men and women killed by extremists in Algeria between 1994 and 1996 have been recognized as martyrs by Pope Francis on Saturday. The decree signed by the pontiff was released on Saturday morning Rome time, […]