The two claim that they have received divine revelations 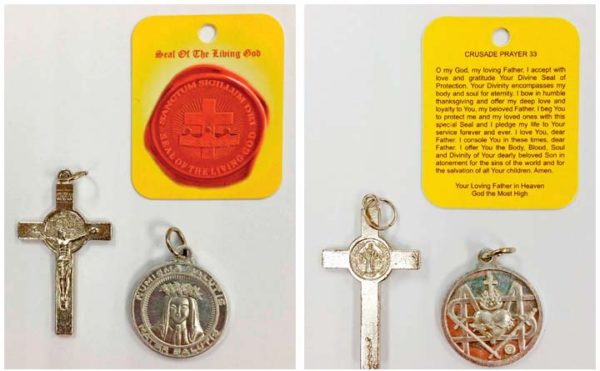 LAST November, it was reported that a group of individuals was distributing unusual devotional objects within Singapore’s Catholic community. Later, a charismatic speaker gave talks about her reconversion to Catholicism. These episodes are related to a much larger phenomenon which Catholics are advised to be cautious about.

A few Catholics had been distributing what appeared to be Marian medals and Benedictine crucifixes. They are also thought to have given out miniature “prayer cards” imprinted with a “Seal of the Living God” and a “Crusade Prayer 33”.

An Internet search of this “Seal” and “Prayer” will instantly identify them as items associated with Maria Divine Mercy, as is the so-called “Marian” “Medal of Salvation” or Numisma Salutis.

Who, or what, is Maria Divine Mercy? This is the name assumed by what is believed to be a self-proclaimed Irish seer called Mary Carberry.

For several years, she publicly claimed to have received messages from Christ and the Virgin Mary. These included apocalyptic predictions about an ousting of Pope Benedict XVI, and words to the effect that Pope Francis was a false prophet who would usher in the antichrist.

It was later reported that she had backdated these self-declared prophecies.

Nonetheless, Carberry has a significant international following and published at least two books. Through these channels, much confusion has been caused among Catholics.