Russia’s Supreme Court has begun hearing a government request to outlaw the Jehovah’s Witnesses and declare it an extremist organisation.

The justice ministry has already placed its headquarters near St Petersburg on a list of extremist groups.

An estimated eight million people worldwide are part of the Christian-based movement, best known for going door to door looking for new converts.

As the case began in Moscow on Wednesday, lawyers representing the movement submitted a counter suit, asking the High Court to declare its members victims of political repression and the justice ministry’s action unlawful.

The court ruled that this was not part of its jurisdiction, but did not say whose it was, Russia’s legal information agency reported. The case was eventually adjourned until Thursday.

The ministry argues that the Jehovah’s Witnesses’ activities “violate Russia’s law on combating extremism” and their pamphlets incited hatred against other groups.

Jehovah’s Witnesses representative Yaroslav Sivulsky told the BBC that the movement had nothing to do with extremism and he complained that in every case the courts never really listened to their arguments.

One pamphlet quoted the novelist Leo Tolstoy, describing the doctrine of the Russian Orthodox Church as superstition and sorcery, according to BBC correspondent Sarah Rainsford.

The group was founded in the US in the late 19th Century and during Joseph Stalin’s reign of terror in the Soviet Union it was outlawed and thousands of members were deported to Siberia. Other Christian groups were also persecuted.

As the Soviet Union collapsed, there was a revival of Christianity in Russia and the ban on Jehovah’s Witnesses was lifted in 1991. 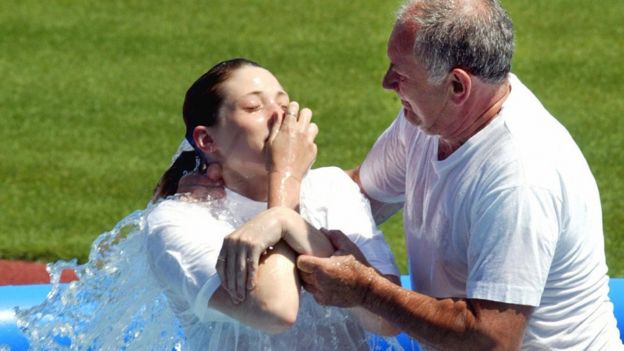 Gradually attitudes towards the movement hardened and in 2004 a group was banned on charges of recruiting children and preventing believers from accepting medical assistance.

Witnesses take most of the Bible literally and refuse blood transfusions. They are not seen by traditional Christian Churches as a mainstream denomination.

In 2009 a report commissioned by prosecutors in southern Russia found that they “undermined respect” in other religions.

Human rights group Sova has said that an “official repressive campaign” has been conducted against the movement for years and many of their members have been physically attacked.

THE WORD of GOD on DCF: “Awa sa Kapwa”

We pray for Duterte, Pray for him with compassion

Our Catholic Archbishop refused to get involved in a war of words with President Rodrigo Duterte, calling on the faithful to instead pray for the country’s top leader. “Pray for him with compassion. We pray for his healing and for God’s forgiveness on him, He is a person in authority and some of you might […]

DUTERTE AND THE BIBLE ON GOD