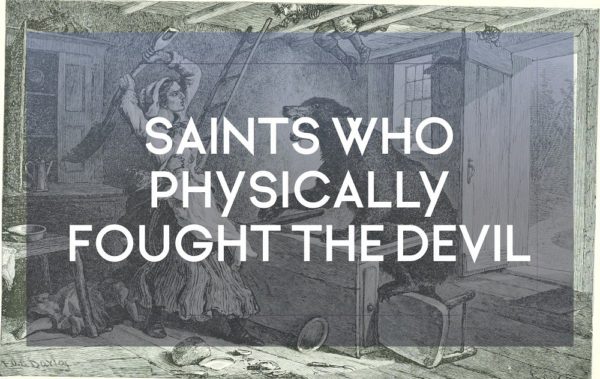 “Be sober, be vigilant; because your adversary the devil, as a roaring lion, walketh about, seeking whom he may devour” 1 Peter 5:8

One day Anthony made a rather odd decision: he decided to spend the night alone in a tomb. According to the story, many demons came and assaulted him physically. Causing him many injuries until he fell to the floor and their claws pinned him to the ground. A friend found him the next day, carried him away for treatment. However, he returned to the tomb again upon recovery and said:

“Here is Anthony. I do not flee your beatings nor pain, nor torture; nothing can separate me from the love of God.”

“The demons made ​​such a racket that the whole place was shaken, knocking over the four walls of the tomb; they came in droves, taking the form of all kinds of monstrous beasts and hideous reptiles. And the whole place was filled with lions, bears, leopards, bulls, wolves, asps, scorpions. The lions roared, ready to attack; bulls seemed to threaten him with their horns; snakes advanced, crawling on the ground, seeking a place of attack, and wolves prowled around him. They all were making a terrible noise. Groaning in pain, St. Anthony faced the demons, laughing: ‘If you had any power, only one of you would be enough to kill me; but the Lord has taken away your strength, so you want to frighten me by your number. The proof of your powerlessness is that you are reduced to taking the form of senseless animals. If you have any power against me, come on, attack me! But if you cannot do anything, why torment yourselves unnecessarily? My faith in God is my defense against you.’

“But all of a sudden a bright light illuminated the tomb; at that moment, the demons vanished. The pains ceased. When he realized that God was coming to his aid, he asked: ‘Where were you, Lord? Why did you not stop this suffering earlier?’ God answered him, ‘Anthony, I was present at your side. But I waited, observing your fight. And since you have resisted so bravely, I will now always be at your side, and I will make your name famous throughout the world.’ Having heard the words of the Lord, the monk stood up and prayed. He then received such strength that he felt in his body an even greater vigor than before.”

Gemma was a mystic who had very many strange experiences, in one of her letters she said:

“For two days after receiving communion, Jesus told me: ‘Be prepared, my daughter; the Devil, at my bidding, will rage war against you.’ These words I hear in my heart continuously. Please pray for me …. Who will win this battle: the devil or my soul? How sad this thing makes me! Where will the war come from? I am for ever thinking about it instead of praying Jesus to give me strength and help. Now I have told you, and I leave this matter to you, that you may help me.
Your poor,”

Prayer was her weapon against hell so no matter what happened she kept on praying, and Jesus always helps:

“What torment this gives me, not to be able to pray! What fatigue it costs me! How many efforts does not that wretch make to make it impossible for me to pray! Yesterday evening he tried to kill me, and would have succeeded if Jesus had not come quickly to my aid. I was terrified and kept the image of Jesus in my mind, but I could not pronounce His name.”

“If you would have seen him Father, when he fled making faces, you would have burst out laughing! He is so ugly!…. But Jesus told me not to be afraid of him”

“Once more I have passed a bad night. The demon came before me as a giant of great height and kept saying to me “For thee there is no more hope of salvation. Thou are in my hands!“. I replied that God is merciful and therefore I fear nothing. Then, giving me a hard blow on the head in a rage he said “accursed be you!” and then he disappeared. I then went to my room to rest, and there I found him. He began again to strike me with a knotted rope, and wanted me to listen to him while he suggested wickedness. I said no, and he struck me even harder, knocking my head violently against the ground.

At a certain point, it came to my mind to invoke Jesus’ Father “Eternal Father, through the most precious blood of Jesus, free me!” I then don’t quite know what happened. That contemptible beast dragged me from my bed and threw me, hitting my head against the floor with such force that it pains me still. I became senseless and remained lying there until I came to myself a long time afterwards. Jesus be thanked!”

The devil is always pure spirit, but in order to reveal himself he takes on aspects which can be most provocative and harmful: fear, seduction, deception. From his childhood, Padre Pio enjoyed celestial visions, but he also experienced terrible diabolical presences. These tormented him in the most frightful forms. They occasionally scourged him with heavy chains, leaving him bruised and bleeding. Sometimes they appeared as gruesome animals. Many biographies recount Padre Pio’s encounters with the demons. Did anyone else see these violent attacks? Amorth: Fortunately, Padre Pio himself described many of his encounters with devils. His accounts for his spiritual director in 1911 in the monastery of Venafro are particularly vivid. That was the first time Padre Pio revealed his rich interior life, both his ecstatic visions and his diabolical torments. Sometimes he spoke freely with the Madonna or the Lord, with no realization that other friars might be nearby or listening.

The devil would appear to him as an ugly black cat, or in the shape of a truly repugnant animal. The obvious intent was to fill him with terror. Other times demons came as young girls, nude and provocative, performing obscene dances, to test the young priest’s chastity. But Padre Pio sensed his greatest danger when the devil tried to deceive him by taking on the form of one of his superiors (his provincial superior or his spiritual director) or in a sacred form (the Lord, the Virgin, or St. Francis).