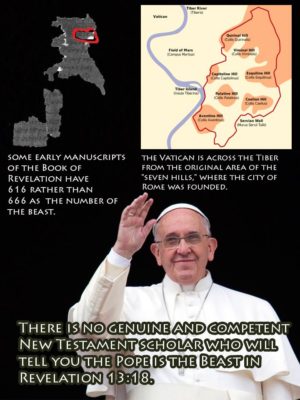 The issue regarding the mark of the beast which they say is 666
in Revelation 13:18 have become repeated questions and reason for criticisms of non-Catholics against the Catholic Church.

Many preachers and other religions say this refers to the Pope
of the Catholic Church.

Here is what we can read in the statement of New Testament
scholar, Dr. Daniel Wallace in his debate with Bart Ehrman in the
Book – The Reliability of the New Testament:

“For example, consider a textual problem in Rev. 13:18,
“Let the one who has insight calculate the beast’s number,
for it is the number of a man, and his number is 666.” A
few years ago, a scrap of papyrus was found at Oxford University’s Ashmolean Museum. It gave the beast’s number
as 616. And it just happens to be the oldest manuscript of
Revelation 13 now extant.”

This will explain why some early manuscripts of the Book of
Revelation have 616 rather than 666 as the number of the beast.
There is no genuine and competent New Testament scholar
who will tell you the Pope is the Beast in Revelation 13:18.

One of the greatest New Testament Scholars of the 20th
Century, Dr. Bruce Metzger said:

“Who is the satanic beast, symbolized by the number 666?
Over the centuries a very great deal of ingenuity has been
expended in attempting to answer this question. A further
complication arises from the fact that some ancient manuscripts
of the book of Revelation give the number as 616
instead of 666. Among the names and titles have been
proposed to solve the cryptogram, the most probable
candidate is the Emperor Nero. If we add the numerical
values in the Hebrew spelling of the name Neron Caesar
we obtain 666; on the other hand, since his name can
equally well be spelled without the last N, if we omit the
final N, the total will be 616.” (Breaking the Code: Understanding
the Book of Revelation with Study Guide by Bruce
Metzger, Page 76-77)

They misconstrued the verse since it does not refer to the Pope
of the Roman Catholic Church.

It’s total fantasy to try to connect the “beast” with the bishops of Rome – not genuine exegesis, but just venomous fundamentalist propaganda.

Revelation 13 referred to first-century B.C.E. Roman emperors.
It is a misrepresentation to identify the images in Daniel 7 or Revelation as modern individuals. Rome is the context of Revelation but this is the direction of ancient Rome and not the Catholic Church.

We must understand the beast in revelation 13 with seven heads
and we can read this in Revelation 17:9.

“This calls for a mind that has wisdom: the seven heads
are seven mountains on which the woman is seated; also,
they are seven kings.” (Revelation 17:9)

The Vatican is across the Tiber from the original area of the “seven hills,” where the city of Rome was founded. The Vatican was kind of out in the suburbs in the early days of the Church. The reason it became important for the Catholics is that there was a cemetery there, where the archaeological evidence shows St. Peter – and many other Christian martyrs – were buried. But we need to keep in mind that the Popes lived at the Lateran Palace, inside the city, and not at the Vatican, until the 16th century.