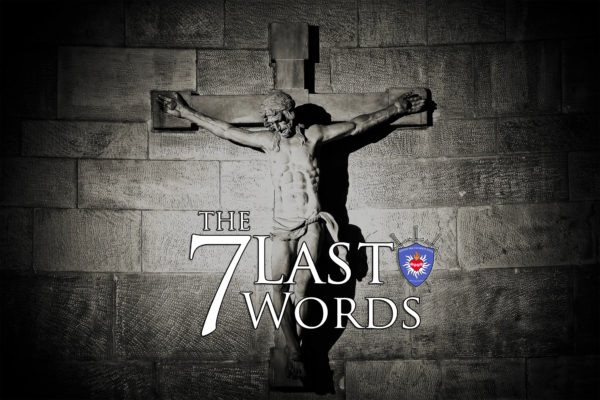 “To many, the Passion of Jesus Christ is a lesson in history where we sympathize with Christ for the sufferings he went through before he died. We find it hard to believe how the people can be so cruel as to inflict the most severe form of pain on a man who we know was innocent. For Christians the Passion should be more than a lesson in history. It should become a lesson in life, teaching us how to stand up for truth and justice.”  – Pope Francis

The first word that Jesus spoke is asking his Father forgiveness not for him but for us. Even though we are the reason why he was crucified, he still chose to show us his mercy and love for us by choosing to become man to die and save us from our sins.

Jesus said these words to a man who was crucified along with him, and Jesus granted his wish. God will open the doors of heaven for those who repent for their sins; those who choose to be with him in paradise.

In this scenario Jesus shows his love to his Mother Mary. It proves that he did not insult Mary ever as what other denomination says. The words that he spoke to John and his disciples, “Behold thy mother”, is proof that he loved his mother. As a true followers of Jesus, we should love Mary because ‘NO MARY, NO JESUS. NO JESUS, NO SALVATION’.

These passages prove the Humanity of Jesus. He was tortured and experienced immense physical pain since he has two natures: Human and Divine (Colossians 2:9). He experiences pain, a pain that we should be the ones who suffered for. Instead, he suffered and died for us. And it is because of His death we are redeemed.

Jesus was thirsty not just for some drink. He was more thirsty for our souls because that was his mission. He is God and he chose to become man for the desired more than anything else to save us. But we, humans who do not want him to our lives, fail to understand that we need him. He was thirsty because people choose not to be with him in paradise.

These words of Jesus mean his mission is fulfilled. He preached and gave the authority to his disciples His Religion had just begun to preach and share the Good news that Jesus gave to us through his Church.

These were the very last words of Jesus before his final breath on the Cross. Jesus is giving up his soul to his Father in Heaven. It proves that the three persons of the Trinity are distinct persons that even though Jesus is Truly God he willingly gives His soul to His Father.

Inauguration of Church funded by the Emir of Qatar Qatari ambassador to Lebanon emphasises the importance of interreligious dialogue. But signs of intolerance also come from Lebanon: Muslim MP attacked online for participating in a New Year’s Peace Mass. She defends the choice: “I’m not the first one, I will not be the last […]